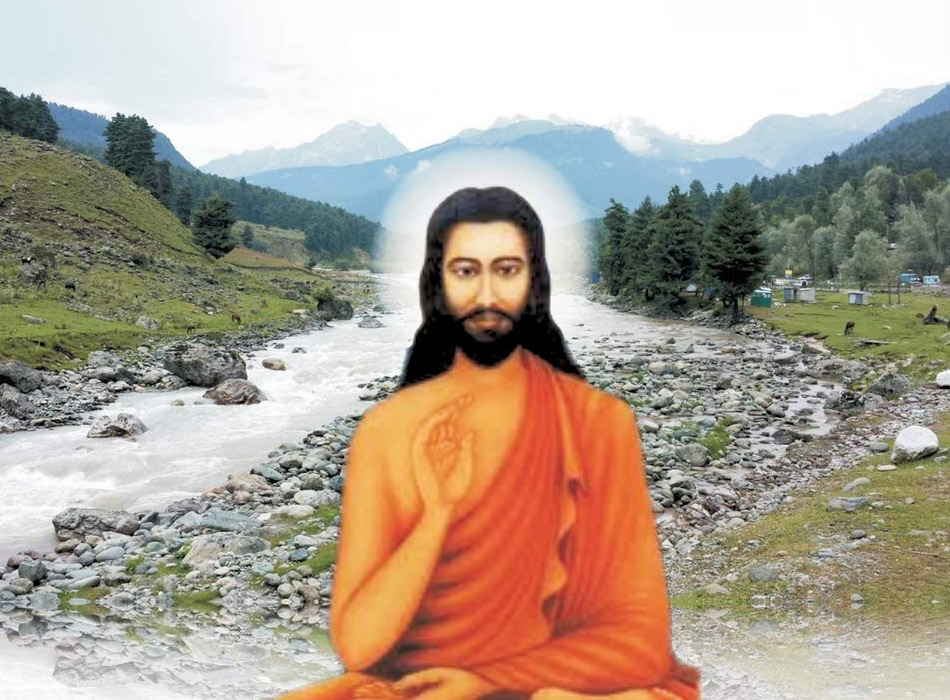 The Self-Realization Fellowship is attempting to show how the Christ Consciousness of Jesus, free from theological crucifixion, can be brought back a second time into the Souls of men.

These spiritual interpretations are born of intuition, and will be found to be universally true if they are meditated upon with intuitive perception. They are received and interpreted through Christ Consciousness. These spiritual interpretations are the means which the Masters have taken to show the world the common, scientific platform of intuitive perception, where the Christian Bible, the Hindu Bhagavad Gita, (i.e. the Hindu Old and New Testaments) and the true scriptures of all true religions can find unity.

Can A Master Take Others' Karma?

And he took bread, and gave thanks, and brake it, and gave unto them, saying, This is my body which is given for you: this do in remembrance of me.—St. Luke 22:19.

In the above words, Jesus showed his human feelings. He prophesied that the people of the world, and the disciples, would in future give thanks to God, break bread and eat it as a symbolical remembrance of his body being broken on the cross for the spiritual nourishment of his disciples and all humanity. Many orthodox people foolishly believe that when they give thanks and break bread, thinking of Christ, they actually eat His body. Jesus did not advocate cannibalism or the thought of being cannibalistic. He only asked that people remember his glorious example of divine attainment and spiritual sacrifice on the cross by thinking of it whenever they break bread and give thanks to God.

And truly the Son of man goeth, as it was determined: but woe unto that man by whom he is betrayed!—St. Luke 22:22.

When Jesus said that he would go "as it was determined," he did not mean that God had absolutely planned for him to be crucified. The scriptures predicted the suffering of Jesus because the writers mathematically calculated the effect of the law of karma upon Jesus and his disciples. Any great Master such as Jesus can lessen the burden of sinful effects of actions of his disciples by taking those effects upon himself. Just as, by putting forth his hand, a powerful man can lessen or prevent the blow of one man on another, so great masters can, by will power, lessen the impending and imminent effects of actions in the lives of their disciples.

Therefore, according to meta-physical calculation of the workings of the cosmic law of karma which governs all human actions, it is found that the death of Jesus on the cross was due to his taking the effects of evil actions (karma) of his disciples and many followers. Jesus gladly gave up his body in order to avert the blows of evil karma which were to fall on his disciples. He could have saved himself easily, but for the sake of truth he acted in a way which he knew would result in death.

The second reason for his passing on the cross was that he broke the social law of catering to the priestcraft rather than break the laws of truth and conscience. However, it must be remembered that although Jesus broke an evil man-made law—and thereby met death—yet his very action earned him eternal life according to the cosmic law. Therefore, though the cosmic law in its great wisdom gave temporary death to Jesus Christ, still, for that very sacrifice, it gave him life eternal. The writers of the scriptures intuitively knew all the laws of action which governed the life of Jesus and his followers, and thus could predict his death.

Hence the crucifixion of Christ was not "predestined." Jesus himself said that be could borrow more than twelve legions of angels to save himself from the ordeal on the cross, but he wanted to glorify God by sacrificing his life for Him and His children. Jesus perfectly demonstrated his mastery over the two greatest commandments by loving God with heart, mind, Soul and strength, and also loving all humanity as himself. By completely giving up attachment to physical life, Jesus took the shortest route to the attainment of life eternal.

As a result of his actions, Jesus — through the twenty centuries and today and throughout eternity — has and will be consciously enjoying his immortal communion with the ever-new joy of God. By throwing away one life, he inherited eternal life. But many foolish human beings seek bread, money, fame, sex and love first, throwing away many lives and reincarnating again and again without attaining immortal life. Jesus said, "He who overcometh (all desires) him I shall make a pillar of immortality in the mansion of my Father, and he shall go no more out (he will not reincarnate)."

Ordinary people and even many truth-seekers, think it is necessary only to be physically crucified in order to reach Christhood. But it must be remembered that Jesus had crucified his ignorance by wisdom, his restlessness by meditation, his desires by renunciation, his sense temptations by interiorization of his consciousness, his hatred by love, selfishness by unselfishness, etc., before he was ready to suffer on the cross. That was the important prerequisite to Christhood. Any one who can crucify physical attachment by God communion will reach the state where it is not difficult for him to crucify his body, if necessary, for God and truth.

Although Jesus was so great he often allowed John, his beloved disciple, to lean on his breast. This certainly reveals his divinely human nat11re. It is wonderful to know that God, fully manifested in the body of Jesus, was so humanly loving, for it shows that if any one loves God deeply he has a chance to receive the love of God. Since Jesus was so loving, certainly God can be loving to His devotees. So when Jesus said, "A new commandment I give unto you, that ye love one another," he gave one of his greatest sermons to the disciples; namely, that it was no use for them co love him if they did not love one another as he loved them. By this, Jesus taught his disciples not only to feel God as the great manifestation of love and ever-new joy in meditation, bur also to love God tangibly —through His presence in the temples of human bodies.

When Jesus said, "I know whom I have chosen," he did not intimate that he had chosen Judas as a fit mechanical vehicle for carrying out a divine mandate in order to play the drama of life and death and resurrection as the tool of God. Jesus merely stated that his divine intuition detected the thoughts of Judas who wanted to betray him, being under the influence of Satanic delusion.

When Jesus said, "The son of man goeth, as it was determined: but woe unto that man by whom he is betrayed," he emphasized the cosmic law of actions which inevitably was going to bring the ordeal to him, and he also emphasized the responsibility of Judas who voluntarily offered himself to be the tool of delusion and Satan. Jesus implied that Judas would have to reincarnate again and again for betraying his great spiritual guru-preceptor for a few pieces of silver. To give up the kingdom of God for a few coins, by betraying the guide who was to lead him there, certainly showed poor judgment and great attachment for earthly things. No doubt any such person would have to reincarnate again and again to work out his earthly desires before he could find redemption. From authentic information I know that Judas reincarnated twenty centuries after he hung himself and was liberated only a few years ago in India, after being born as a disciple of a great master—due to the wish of Jesus.